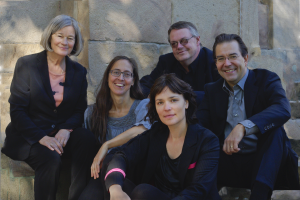 LIPPARELLA was founded in 2008. The members were since long well established musicians mainly within chamber music and they met in a joint passion for both early and contemporary music. Since the start the group has specialized in contemporary works for baroque instruments and countertenor. This unusual profile has been determined by the creation of new works directly for the ensemble, which has been made possible through collaborations with a number of composers.

During the past years  have composers like Per Mårtensson, Erik Peters and Lisa Streich composed new works for Lipparella. New collaborations are initiated continuously; there is a strong interest of composers in using the special sound qualities and subtle articulation possibilities of the baroque instruments, in combination with the special vocal pitch of the countertenor. Earlier collaborations have resulted in pieces by  Mats Persson, Chrichan Larson, Madeleine Isaksson, Ivo Nilsson and Kent Olofsson among others.

Lipparella also plays works by international composers such as Jukka Tiensuu and Harry Suilamo from Finland and also Karlheinz Stockhausen, John Cage and Aldo Clementi. Characteristic for the focus of Lipparella  – unique also in an international perspective – is to create a field of tension between the sounds of the instruments, rooted in a historical époque, and a musical language from our own time.

In addition to contemporary works, Lipparella obviously also plays the early music where the instruments have their origin. The ensemble performs programs both dedicated to contemporary or early music but also in combinations of the two in special program concepts.

MIKAEL BELLINI is one of the principal countertenors in Scandinavia. He has a broad repertoire that spans from renaissance to 21st century. Mikael’s specific interest for contemporary music has resulted in several composers having written pieces directly for him. He is also in demand as an opera singer, much appreciated for his beautiful and flexible voice and for his acting abilities. There are recordings from a number of companies with both baroque and contemporary music. Mikael is also working as a piano technician and voice pedagogue.

ANNA LINDAL was during a long time playing in the string trio Trio des Lyres, specialized in mixed programs with older music on original instruments and contemporary repertoire. 1983-2001 she was concertmaster in the Stockholm Philharmonic, 2002-2006 Visiting Professor of violin at the Royal College of Music in Stockholm. She has collaborated with several contemporary composers and in ensembles with free improvisation and has recorded two solo records. She is part of many interdisciplinary projects in collaboration with artists, authors, filmmakers and choreographers.

KERSTIN FRÖDIN (recorder and historical oboes) is internationally engaged as a soloist and chamber musician within both early music and contemporary experimental music. Her interest for contemporary music has led to a number of collaborations with composers. She has also performed in a number of stage productions such as dance, opera and theatre performances. Kerstin has recorded music at companies like BIS, Phono Suecia, Proprius, Caprice, dB-productions et al. Since  2015, Kerstin is a doctoral student within an artistic research program at Luleå Technical University.

LOUISE AGNANI is a multi facetted musician who besides playing the viola da gamba also performs on baroque and modern cello. She has a position in Uppsala chamber orchestra and has worked with most Swedish symphony and baroque orchestras. As a gamba player Louise has for instance participated in performances of baroque operas in Sweden and in recordings such as Ensemble Villancico (Caprice 2002) and Mårten Falk and EL Escorial (dB 2010). The gamba is close to her heart and its special sound makes it an exciting instrument within the contemporary chamber music.

PETER SÖDERBERG has a background as a guitarist and improviser. As a lute player he is since many years a profile within both early and contemporary music. Many composers have composed solo works for Peter, some of them recorded on Phono Suecia CD “Liuto con forza” (2010). Besides his concert performances Peter also participates in different theatre, dance and literature contexts. He has participated in many recordings and is also active as a writer in the Swedish contemporary music magazine “Nutida Musik”.