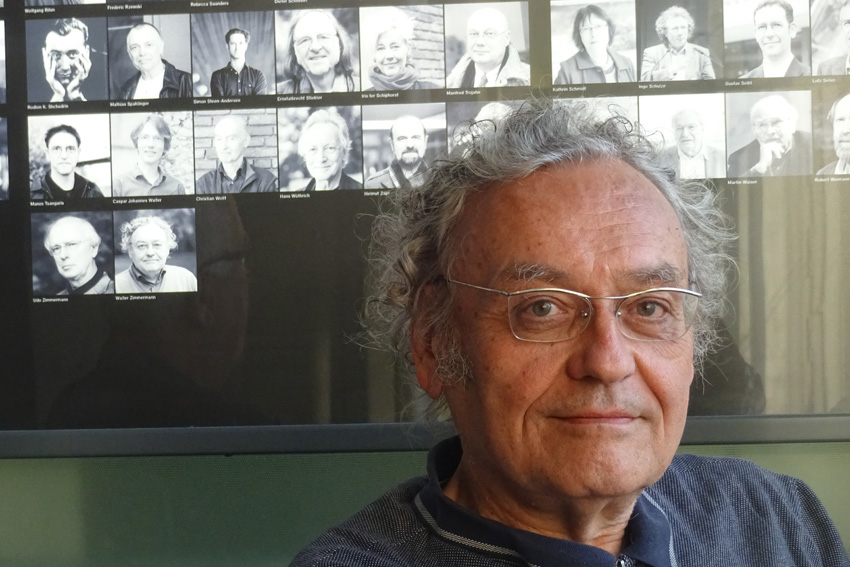 18:00 Introduction. Peter Söderberg in conversation with Walter Zimmermann (in English)

For the first time in Sweden, German composer Walter Zimmermann is portrayed in full scale. During the last year, Ensemble Lipparella has had an extensive collaboration with Walter Zimmermann. He has composed two new works for Lipparella and also made new versions or earlier works for the ensemble’s setting of baroque instruments and countertenor. The programme presents songs in several languages, solo and ensemble works. Also included in the performance are readings, video projections and loudspeaker sounds.

In connection with the concert, works by visual artist Nanne Meyer, with a close connection to the music performed, will be displayed in the foyer.

One hour before the concert, the music of Walter Zimmermann will be introduced in a talk between Peter Söderberg and the composer (in English).

The concert is produced with support by Goethe-Institute Sweden.

German composer of stage, orchestral, chamber, choral, vocal, piano, and electro-acoustic works that have been successfully performed and recorded across Europe.

Prof. Zimmermann learned piano, violin and oboe at an early age and began composing at age twelve. He attended the Fürth Gymnasium, where he studied piano with Ernst Gröschel. From 1968-70, he was pianist in the Ars Nova ensemble in Nuremberg and studied composition with Werner Heider. From 1970-73, he studied with Mauricio Kagel (at the Kölner Kurse für Neue Musik) and at the Institute of Sonology in Utrecht (with O.E. Laske) and the Jaap Kunst Center of Ethnology in Amsterdam.

In 1974, Zimmermann began his stay in the USA, first in Hamilton, New York to study computer music, and then around the States to have conversations with 23 American composers (which were published in the book Desert Plants). In 1976, he recorded folk music in the Siva Oasis, in a ghetto in Pittsburgh, an Indian reservation in Montana, and in the Fürth hinterlands. In 1977, he opened his Beginner Studios in Cologne and gave regular concerts of new music until 1984. In 1992, he and Stefan Schädler organized the Anarchic Harmony Festival in Frankfurt to honor John Cage on his 80th birthday.

He has received numerous awards, including the Förderpreis from the city of Cologne (1980), First Prize at Ensemblia in Mönchengladbach (1981), a scholarship to stay at the Villa Massimo in Rome (1987), the distinguished Prix Italia for his Die Blinden (1988), and the Schneider-Schott Preis (1989).

He is married to the visual artist Nanne Meyer